WORTHINGTON – With the American and German flags displayed on either side of the Chautauqua Park Bandshell on Wednesday evening, Worthingtonites and Crailsheimers came together to celebrate a sister city partnership that has thrived for 75 years – and is now challenged to thrive for 75 coming years .

The Oberburgermeister (Mayor) of Crailsheim, Dr Christoph Grimmer, took the stage between musical selections performed by the ‘Amazing’ Worthington City Band and the Crailsheim Stadtkapelle to reflect on the storied past of a friendship that has stood the test of time. test of time.

“Seventy-five years old. What number – the longest existing and continuous relationship between a German city and an American city,” Grimmer told the large crowd gathered in the park.

The sister city partnership began with a young Worthington girl, Martha (Cashel) McCarthy, and her family wanting to help people in a war-torn Europe. The idea progressed to the town of Worthington, which then agreed to help a community of similar size in an agricultural region of Germany. The city found this partnership with the inhabitants of Crailsheim in 1947.

“At that time Crailsheim was in ruins,” Grimmer explained. “We were worried about our future because the Second World War had just destroyed cities and torn families apart.

“We wanted a brighter future, a peaceful future, and with the tremendous help from Worthington – for which we will always be grateful – we were able to start fresh and rebuild our town.”

Grimmer said the warm hearts of the Cashel and Worthington family couldn’t be rated high enough.

“We can’t even describe how lucky we were that the Cashels chose us, helped and encouraged us to keep going and eventually everything would just get better again,” Grimmer said. “The generous donations we received alleviated Crailsheim’s material distress and helped begin our post-war development into a thriving community.”

Grimmer explained how the people of Crailsheim and American soldiers became friends after the war, and through the partnership with Worthington, the two communities found a way to stay connected.

“City-to-city partnerships succeed because their citizens are open-minded and eager to understand their partners’ perspective and reduce bias,” Grimmer said. “Open-mindedness and tolerance will become increasingly important. We must transmit this passion from generation to generation….

Grimmer said he was pleased that the student exchange program between Worthington and Crailsheim, paused for the past two years due to the COVID-19 pandemic, will resume later this summer.

“It is important for young people to learn to understand the mentalities of foreign countries and to develop tolerance towards these countries and their people,” he added.

It is not just the exchange of students that Grimmer hopes will continue in the future, but the regular visits between the two communities.

“We have to focus on our friendship and involve our young people,” he said. “The youth is our future, just like the youth the future of our friendship. We need to keep visiting each other, making music together, helping each other and laughing together.

As part of the celebration, Grimmer presented Worthington Mayor Mike Kuhle with a framed print depicting the Crailsheim Horaff (a W-shaped pastry shop), with the German and American flags to signify 75 years of friendship between the two cities.

Kuhle, who spoke briefly at the celebration, said the partnership began on humanitarian principles, but was nurtured and developed into many friendships.

“Annual student exchanges are the heart and soul of this relationship and are complemented by music from our city band exchanges,” Kuhle said. “Both of our communities have been blessed beyond measure.”

Kuhle called for all peoples to commit to another 75 years of friendship between sister cities as a contribution to “secure peace in a world where complex issues challenge us all.”

Christopher Fuchs, Deputy Consul General at the German Consulate in Chicago, Illinois, arrived in Worthington on Wednesday to join the Sister Cities celebration. He said when he first heard that this partnership began in 1947, he didn’t believe it.

“In 1947, Germany was the enemy – it was ravaged by war,” Fuchs said. “But that’s when these things become the most important.”

Growing up in Germany and living as an exchange student as a 13-year-old in Knoxville, Tennessee, Fuchs remembered the lyrics to a song he learned while attending Children’s International Summer Village. . While he said he wouldn’t sing it, he said, “Here in this village, you can see children living happily. Different race and different land, here we come to understand; The other’s point of view, learning through the things we do; How much I look like you.

Those words gave Fuchs direction for life and a similar spirit for the relationship Worthington and Crailsheim have built over the past 75 years, he said.

“The war in Ukraine reminds us all that we cannot take peace for granted and that we must actively build it,” Fuchs said. “That’s what you all do. Thank you so much for doing this – for your communities and for the world at large.

Wednesday night’s celebration included the presentation of a Lakota quilt to Grimmer and the town of Crailsheim by Worthington native Paul Sommers LaRoche.

“I grew up in Worthington, but I’m also a proud member of the Lower Brule Sioux Tribe of South Dakota – and that makes me a Lakota,” said LaRoche, cultural ambassador and advocate for the Lower Brule Tribe. “My role has been to work on lasting relationships and friendships.

“The Lakota Star quilt is one of Lakota’s most treasured gifts – representing honor and generosity.

When the star quilt is draped over the shoulders of the recipient, it symbolizes lifelong protection,” LaRoche said.

The quilt, in the colors red, white, yellow and black, was held together by Kuhle, with help from Brianna Morales James, a ninth grader at Worthington High School and member of the Ojibwe Nation, and her mother, Amber Morales James. Together, the trio draped the comforter over Grimmer’s shoulders.

“In honor of our 75-year partnership and a reminder that we are all connected,” LaRoche said after Grimmer held the quilt around him. “The star quilt will have a good new home.”

The 75th anniversary celebration continues throughout the weekend, with visitors to Crailsheim being invited to take part in the Worthington Windsurfing Regatta and Music Festival. 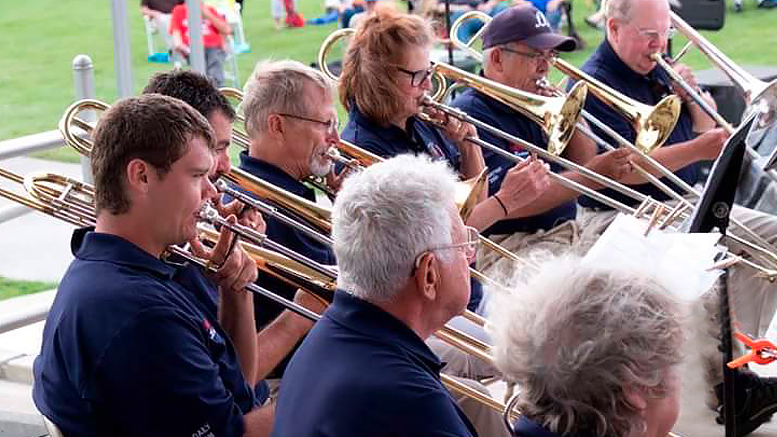