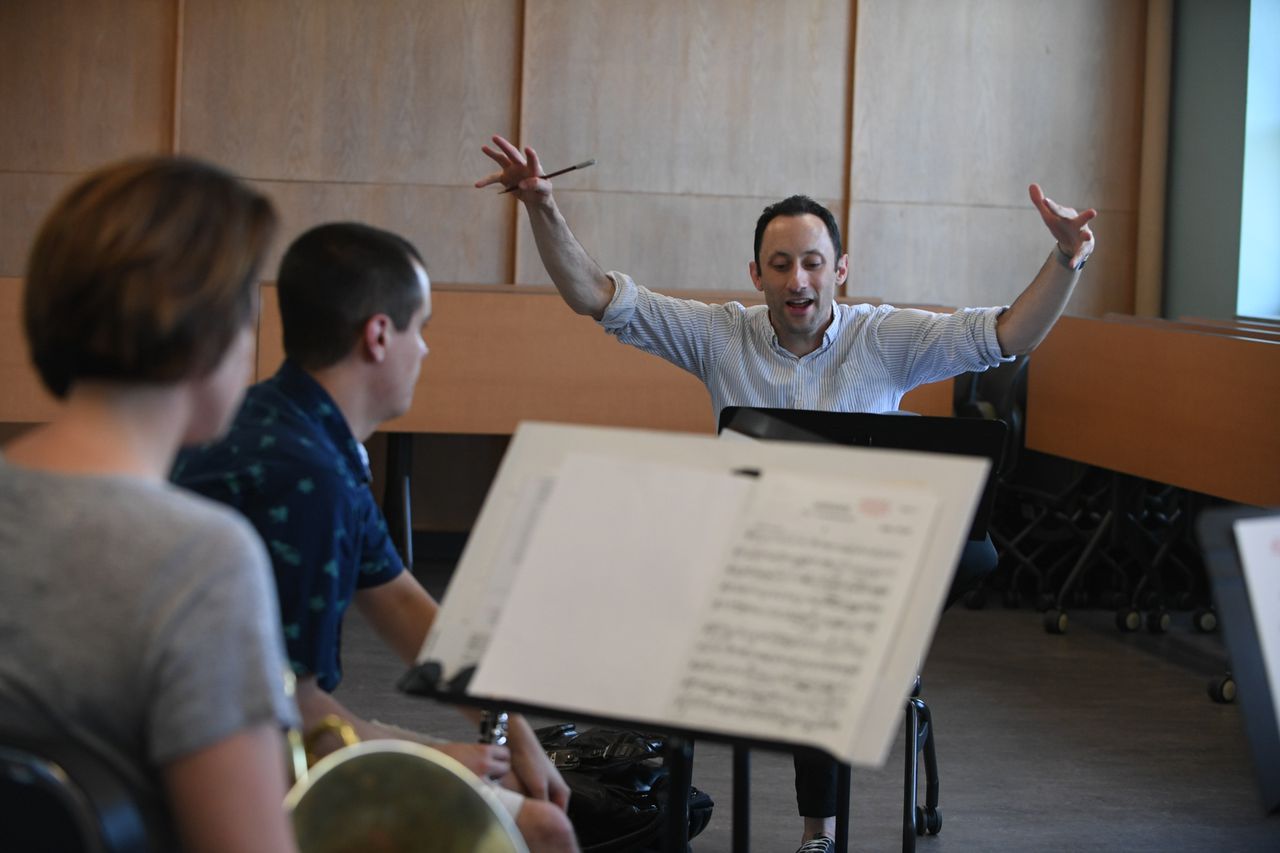 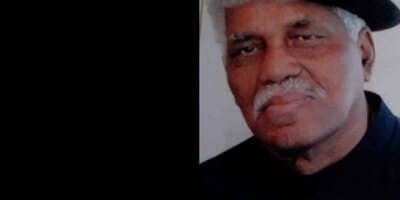 Joined in music are John Kusiak, right, with his son, Ben.

The scene is a busy street in New York City in 1910. A piano plays, and we see horses and strollers whizzing by as men in top hats and women in long dresses pass by. Chord changes and a backdrop of strings keep the action moving until the focus is on the all-new Penn Station. Music swells and horns join us as we see the grandeur of the building. We then see the men who built the station and the musical tempo accelerates, a bit like a train picking up speed.

INSIDE ARLINGTON:
Among our multi-faceted residents

For the PBS documentary, “The Rise and Fall of Penn Station”, the background music provides the ambiance and the feeling. Often overlooked, music designed for TV shows, commercials or movies is its own art form, evoking emotion and adding texture without going beyond the subject. Without music, the PBS movie would have a narrator and scenes of passers-by and a building. But there would be no punch.

Arlington composer and musician John kusiak has created the oomph for television, movies and commercials for over 40 years, writing music for the PBS show “American Experience”, numerous commercials and films and most recently podcasts. He does it from his home studio equipped with synthesizers, computers and keyboards. Her son, Ben, came down the stairs to watch and listen to his father at work, sometimes joined by friends from school.

Today, Ben Kusiak is also a composer while some of his friends have left their mark in the music world. Like his father, Ben writes for commercials and movies and added podcasts to the mix. In a happy twist, he sometimes hired his father to help him.

“He could still see me working from home, and he would sit in the studio sometimes,” John said in a recent interview. “It’s not like I’m giving him lessons per se, but he picked it up by osmosis and saw it as a possibility and maybe it could be fun.”

Ben’s friends at Arlington High School gave him the nickname Kenny, combining “Ben” with the K in his last name. The name stuck, and he writes music under the name Kenny kusiak. He went from his father’s studio to his own, with equipment and instruments filling a room in his Brooklyn apartment while John still works in his Arlington studio.

Ben has written music for television and has done sound design, mixing, and sheet music for podcasts, including the popular “Crimetown.” He has also written for films and commercials, such as Casper Mattresses as well as Cartoon Network and MTV.

When Ben was growing up, it was his father’s studio that caught his eye. “As a kid, I would go there and he would play us the music he had been working on that day. I watched and took in more than I thought I would. “

Ben was surrounded by music, not only at home but at school. He thanks his teachers at Arlington High School for encouraging him. At the request of drama teacher Michael Byrne, he starred in a production of “Les Mis” and was recruited by Cheryl Hemenway for the Madrigal Singers.

Ben was surrounded by music, not only at home but at school. He thanks his teachers at Arlington High School for encouraging him. At the request of drama teacher Michael Byrne, he starred in a production of “Les Mis” and was recruited by Cheryl Hemenway for the Madrigal Singers. He graduated in 2006.

His instrument in high school was the guitar, not a traditional band instrument, yet Sabato “Tino” D’Agostino, head of instrumental music, found a way for him to be included, even giving him a solo in “Bohemian Rhapsody. “.

D’Agostino’s, the influence of the father

At the dynamic gatherings, D’Agostino made sure to include “guitar-oriented stuff” as Ben calls it, such as “Soul Man.” At soccer games, the group played from the stands and Ben joined in using a generator and portable amp. He credits his father for encouraging his high school friends to embark on music and other creative careers. It worked: Zach Gresser is a music therapist; Seth Botos is a drummer; Benjy Brooke is a freelance animator who has worked on projects for Netflix. The band, including Kobi Cummings, were in a middle and high school band and John recorded their CD.

His father, meanwhile, had himself played guitar earlier in his career and had written music for the Dart-Band stroller, of which he was a member. A former neighbor of Arlington, Bestor Cram, founder of Northern Lights Productions, was making a movie and asked if John would write the music for the movie. John didn’t look back.

“I just loved it,” he said. “I thought it was fun and I’ve always been very eclectic and wrote music that wasn’t necessarily applicable to the band I was in, and I had a lot of stuff on the shelf. Composing music for movies requires you to be eclectic and able to write in different styles. And so it was perfect for me.

John’s work includes commercials for Visa and Taco Bell as well as the documentaries “The Fog of War” and Tabloid, ”directed by Erroll Morris. He wrote the music for the film of Eric Stange, an Arlington resident. “Edgar Allen Poe: Buried Alive. “

John’s music can be in the background, but it also stands on its own for occasions such as weddings or just to listen and enjoy. It is available in sheet music to buy or download to buy.

Ben says his siblings are also musicians. Her brother, Jackson, who works in the solar industry, is a good songwriter and her sister, Jessie Russo, is an artist, singer and songwriter. “At first, I didn’t know I was going to do the same job as my father: composing for film and television,” Ben said. “But it was very clear that music was a gift he could pass on.”

May 5, 2021: A revolutionary designer from Arlington sketched many eras

This report by YourArlington co-editor Marjorie Howard was published on Wednesday, June 9, 2021. 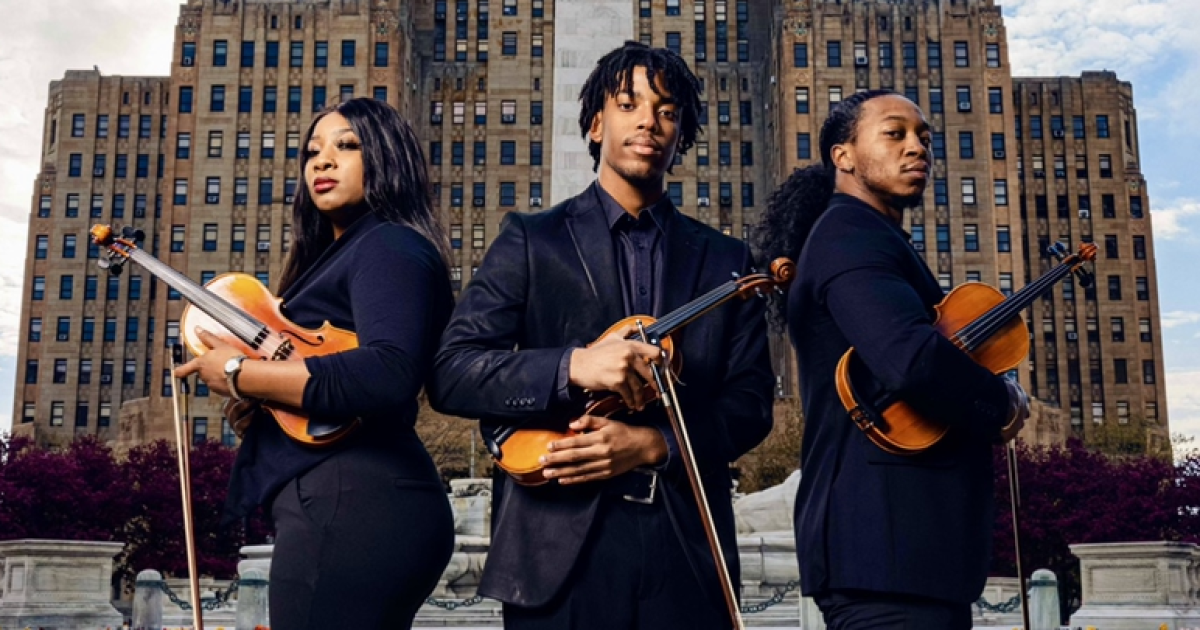